Earlier this year, Shiji’s COO Kevin King was invited to address the audience at the Skift Tech Forum 2019 in San Francisco, CA  to discuss the future of tech travel and how Shiji Group is approaching the market. With hospitality tech industry leaders invited from around the world, the Skift Tech Forum broke into the latest strategic thinking of the industry and how companies like Shiji Group and other disruptors are impacting the change. As we look ahead to 2020, below are some key insights from King’s Skift Tech Forum interview.

Given our recent string of acquisitions of hospitality technology companies, there has been a lot of buzz about what’s next for the company. We’ve bought all of these companies and we have grown our portfolio of different products, and the future will only include more expansion. There are certain areas in travel technologies that we are working with; big partners too, to contribute back into the industry; both hospitality and wider fields, in the distribution sense. While it can be a challenge sometimes to get everybody on the same page and get everybody following the same leadership environment. For the most part, we have been very successful at that and we have the people within the organization to shift according to the technology.

With expansion, there also comes risk, which is why at Shiji Group, we prioritize security first. We were fortunate to create a foundation first when building our technologies. One element of that was the very first thing we did was put an internal security organization together that polices us as an organization and then anybody that connects into us is also policed as far as data security. We’re all aware of GDPR policies and privacy and so forth. Now with the addition of newly acquired technology, we can take advantage of our solid foundation and now the new solutions that we have acquired have gone through a GDPR process and a security process as well. In the future, all new technologies that we build are built from that perspective up.

As an international company based in China, we have been able to take advantage of our global presence from Shiji Group and our subsidiaries that we have not experienced any barriers in working with people. One of the reasons for that is the size of the market in China. As Stephannie Linnartz from Marriott mentioned at the forum, the growth for Marriott is in China. Also discussed at the forum is the growth in hotels and how many other larger hotel groups and smaller hotel groups are wanting to enter into the Chinese space as well. Many other groups are growing quite aggressively in the market, and our growth will also continue in China, but not only within the hospitality space. We have retail, food services, and other hardware divisions that we've grown in China.

Given how quickly hotel tech is changing, there are a few challenges when growing as a large corporation. Not everything you buy is immediately consumable, but you’re buying based on strategy, so you don't necessarily have to buy based upon the technology that's available today. We have some technology that's very old, that will eventually be retired, but not the people or the inherent knowledge that we have within the organization. The foundation of the technology may need to change ,but we have the ability and the funding to enable that change.

Shiji’s approach to partnering with start-ups

In today’s industry, there are various touch points of technology within hotels today. When overlaying the technologies that Shiji Group has, about 70% of those touch points are covered within Shiji Group’s products. We looked, we listened, and we learned when we first became international, to really identify what the market needs. We were able to accomplish this by looking at start-ups. We looked closely at various companies that were trying to get into our customers, which we then acquired some and partnered with others. One of our biggest strategies was, and still is, to really contribute back into the industry.

Foundation of Open APIs for our technology

While companies may have technology that can provide services to the customer, they also need to be very open to allow others to connect into the platform that they have, which is why we love to work with start-ups. A lot of motivations and ideas come from start-ups. If they are really good at what they do and we put a little investment into them in the beginning, for instance StayNTouch, then later we ultimately end up acquiring them. It’s a win-win situation for us and the start-up, and an overall win for the industry.

Understanding the customer to bring success and satisfaction

Shiji Group is a company that has a 20-year history that started with very humble beginnings and partnered with companies along the way. Throughout its history, the group has been creating its own products within China and learning from China and the growing Chinese market, which was really all about the guests - it’s all about the consumer and the interaction with consumers. When we then decided to go international, we selected just a few customers to learn from, to look at and learn from them by listening to what their requirements were and identifying them to build around that. One of the foundational things is to really listen and be able to have products that we can deliver, so that we can begin modeling and testing together with the customer. And, some of it works and some of it doesn’t. An example of a customer that we had great success with is the Hyatt Group. We had an opportunity in China for one of our products, and we went with it to Hyatt. We listened to what their expectations were and not only were we able to show them what we had today, but how quickly we were able to adopt and adapt to what their global strategy was in certain areas of consumer touch points, as well as technologies within the group. Ultimately, we were successful in winning bids with Hyatt, specifically on our food and beverage point of sale solution.

Not Only About the PMS...It’s About One Single Guest Profile

The PMS is one of the better known technologies of the hospitality industry. However, it’s not just about the PMS. As more and more property management systems are going to the cloud, they are becoming components of the guests' itinerary, segmenting the guests, and what the guests need in a hotel. With cloud technology in PMS, hotels are able to attach that one single guest profile and work with that guest across all of it:  prior to stay, in-stay, post stay, and return stay.

A word of advice for hotels

When thinking of where the ball is going to be in the future, it’s crucial to stop and think and plan. This is one thing I learned from talking to a lot of large organizations. Everybody has these monolithic goal solutions and they're very loosely aligned together, but all revolve around the loyalty of the guest, which is very important. It's a journey, not a sprint. Companies must also be security-conscious first and then start to build out what that next step is. Along the journey, you still need to address and be competitive to your competitor, where there will be some short-term tactical approaches and strategic ones further down the track. Not everything has to be done immediately, especially in the very large groups. You have to really sort of piece it together.

There's a lot of data in the industry, but really it's not actionable data now. Big data has been discussed among industry leaders where there are huge supporters and some that are not great fans of big data. I would say that when it comes to big data, I am not a fan until we are able to shrink that data into small data. When you have small data and when that small data is rationalized, while not necessarily a science, you then have the ability to act upon that data. Our data strategy lies in taking big data, rationalizing it, and acting upon that…..

When it comes to new acquisitions in addition to ones like SnapShot and StayNTouch, we are still looking for the right technologies for our market. We will not stop looking, we will listen to our customers, and we will look at what's the trend. One of the key areas as an organization is to look, listen and learn from our customer base to really define who we target to acquire. Shiji Group will continue to grow and expand within China and the rest of the world in the hospitality space, as well as other industries. 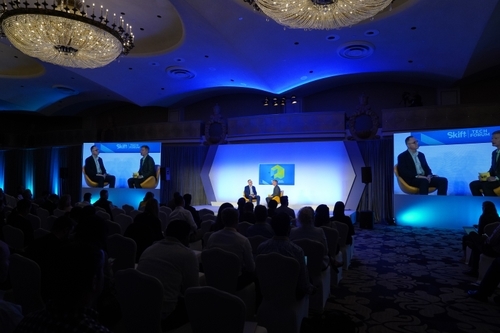